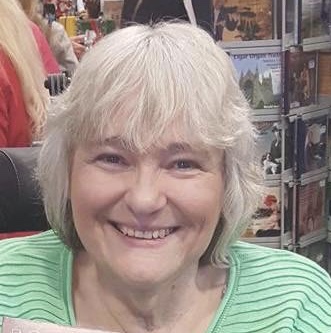 By Kath West, Trustee of the Thalidomide Society and thalidomide survivor.

I gave up working for health reasons when our boys were still at infants and junior school. My back was very bad at the time and I found it difficult getting out and about. Once my back problem started improving I was left rather isolated and bored at home – I needed something to do.

One day I picked our youngest son up from school and he was a bit upset. He had just started at junior school and one of the older children had said something about his Grandma picking him up. He explained that I was his mum and the boy said I couldn’t be because I was in a wheelchair!  At that moment, I decided I needed to get more involved with school, so that the children there would get used to seeing me around and think it quite normal. So, I joined the Parent Teacher Association. Pretty soon I was seen around school, helping out at school fairs and discos, selling sweets, putting on temporary tattoos, running stalls. My son never had any further trouble, I was simply known as Sam’s Mum, or Mrs. West!

After four years on the PTA and a meteoric rise through the ranks, as Secretary, Treasurer, Vice Chair and then Chair, I decided it was time for me to step down. I no longer had a child at the school. That’s when the Head Teacher asked if I’d like to become a school governor. I was a bit daunted at the thought, but I decided to go along to a couple of meetings and see what it was all about. Both our boys had really enjoyed their time at the school, the Head and staff were all very friendly and I really wanted to give something back to the school community. I joined after attending the first meeting! 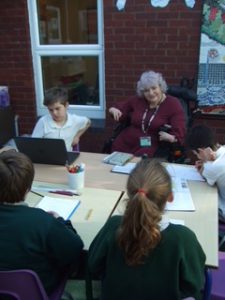 I remember I didn’t say much for the first few meetings – there were so many acronyms and terms to get my head around, but the other governors were very supportive. I attended a number of Governor training sessions, which were really helpful too. Once I’d settled in I was surprised at how many skills I had to offer. I took on the role of Special Educational Needs linked governor, working closely with the SEN Coordinator to ensure the school is as inclusive as it can be and all children can access the full curriculum. (This is an area I am really passionate about. I remember how things were when I was at school and am very pleased to say attitudes have changed considerably!).

Having worked in Social Services for 15 years, I had knowledge of child protection issues and procedures, so I also became one of the governors responsible for child protection and safeguarding.

I love going into school, carrying out Pupil Voice interviews with the children, asking for their views on school and what they liked about lessons and school life. And in a roundabout way, I teach them about disability awareness; the children are fascinated by my wheelchair, which often prompts a conversation about disability. They are always polite and courteous, but very interested in why I am physically different, why I use a chair, why I sometimes walk. They want to understand, and they show real sensitivity. One little girl came up to me, who obviously wanted to ask me a question but was unsure whether it would be rude. When I assured her it was fine she asked two questions: what was wrong with me, and did it hurt?  I could have hugged her!

Giving the children an opportunity to meet someone with a disability is very important to me – when new children start at the school they stare the first few times they see me but within a month they are smiling and by half term they are saying hello. Word on the playground is that I am the favourite governor!  I’m not sure how much of this is due to my amazing green wheelchair that goes up and down and has lights, and how much is due to the fact I give the children house points when I have interviewed them! 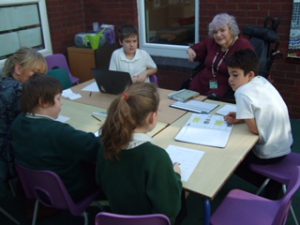 Schools are always on the lookout for new governors and it is a really rewarding and worthwhile thing to get involved in.  Since our boys have grown up and left home, I have realised the importance of keeping my mind active as well as my body, and school governance certainly does that. It doesn’t take up too much of your time, usually two meetings per half term and a termly visit during the school day. I have chosen to become more involved, as Vice Chair of Governors and Chair of one of the committees, so I’m in school on average once a week, but that’s by choice.  I can honestly say I think I get as much out of the relationship as the school do, and I’ve made some great friends along the way.

So, if you’re at home and have the time and inclination, why not see if there is a school near you that could use your skills and knowledge? Wheelchairs are not compulsory, but if they help raise awareness in the younger generation, all the better!