Louise was born on 23rd June, 1962 at Chase Farm Hospital in Enfield, London. She died on 7th November, 2018 at Churchill Hospital, Oxford.

Born with no arms and legs, due to the effects of the drug thalidomide which Louise’s mother took during pregnancy, Louise spent much of her early life at Chailey Heritage Craft School and Hospital. Chailey Heritage was the first purpose built school for disabled children in the UK, founded in 1903. Many of Louise’s peers at Chailey were born between 1958 and 1962 and also damaged by thalidomide. Louise made many life-long friends there.

Louise’s father, David Mason, was instrumental in the campaign for increased compensation for the families affected by thalidomide. As part of this campaign, Louise was often brought into the media spotlight to meet and pose for photographs with celebrities of the time.

Louise herself later viewed this with mixed feelings; on one hand the positive attention was welcomed but on the other, her ‘high profile’ status brought negative attention from some of her peers, leaving her feeling isolated at Chailey.

Louise left Chailey when she was 18 and spent a few years at the Star Centre in Cheltenham, a further education college for people with disabilities. She bought her own home with some of her compensation money in 1981. Soon after, she met John Medus who she married in 1987 and had two children, Emma and Jack, born in 1988 and 1992. Louise and John’s marriage broke down and they separated in 1995.

Louise was often plagued by ill health: she had an inherited renal disorder, polycystic kidney disease, and received her first kidney transplant in 2001.

In the 1990s, Louise became involved with the Cheltenham branch of the Woodcraft Folk, where she was active; campaigning for their facilities to be made more accessible, joining their Council in 2007, taking part in recruitment activities and taking on leadership roles. 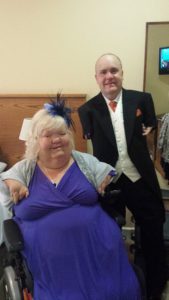 In 2000, Louise had rekindled her first love from her teenage years with Darren Mansell, also a thalidomide survivor. In 2008, they married.

Through Darren, Louise became involved with the work of the Thalidomide Society where she became a trustee and went on to take on the roles of Vice Chair and Chair. Louise was also a member of the National Advisory Council of the Thalidomide Trust for many years.

One of Louise’s proudest achievements was ‘Thalidomide at 50,’ an event she organised in 2012 at the Park Plaza Hotel in central London to mark the 50-year anniversary of the withdrawal of thalidomide from the market. It was a fabulous occasion – the first time that such a huge number of thalidomide survivors from across the world came together in celebration. The speakers included Sir Harold Evans, Sir Alf Morris and Janet McCredie. At times, in the cavernous, packed auditorium, you could have heard a pin drop.

Over the last three years, Louise’s health declined and she often spent long stretches of time in hospital. The earlier kidney transplant failed in 2017 and in 2018, Darren donated one of his kidneys in a kidney exchange scheme, allowing Louise to have a second transplant, offering her the chance of freedom from a life on dialysis. Unfortunately, her health declined further over 2018 and she lost her fight peacefully, in hospital with Darren and some of her family by her side.

Louise was known widely throughout the thalidomide community as someone who fought ferociously for her own independence – determined, proud, dedicated, funny, warm, sharp, infuriating and absolutely unforgettable. She will be missed by her beloved children, Emma and Jack, her grand daughter Daisy, her devoted husband Darren, her dogs Rocky and Macey, the thalidomide community and all those who had the good fortune to get to know her.